If Christ defeated death, why does Paul characterize it as an enemy in 1st Corinthians 15?

Then comes the end, when he delivers the kingdom to God the Father after destroying every rule and every authority and power. For he must reign until he has put all his enemies under his feet. The last enemy to be destroyed is death. 1st Corinthians 15:24-26

Death while defeated has not yet been destroyed. It remains an enemy for at lest two reasons: suffering & sin.

Suffering
Revelations tells us that in the Kingdom of God, “death shall be no more…for the former things have passed away” (Rev. 21:4).

Two implications of death are mortality and misery. Mortality means departure, loss, and separation. But misery refers to the brokenness of relationship. In Heaven, neither of these shall threaten us.

To die is to be exiled from life, to be separated by mortality from the activity and scene of action (it seems). Because we often imagine life here as the truest and final life, we imagine that such separation means to cease to exist. This is not the case. Rather, we enter into the full reality of existence at the point of our death, either into the reality of our self-will, our sin, and our isolation, or into the reality of God’s grace.

Therefore the ultimate meaning of death is located, not in the mortality of our terrestrial life, but in that death of spirit which cuts us off from life, joy, and relationship. As strange as it sounds, after we die, mortality ceases to be an issue. However, death looms large in what is referred to as the second death–that eternity of ongoing dying which the damned experience.

This death, the death of suffering and separation, is an enemy of God and God’s people in as much as it is the antithesis of the life of the Spirit. It is an enemy just as poor health and decrepitude are the opposite of physical health, vigor, and vitality.

But, death is also our enemy in another more subtle way.

Fear
Because we fear dying, we sin.

This is a funny way to put things, especially considering the biblical narrative. It was sin which causes death, not vice-versa. It is true, sin came first and then death. However, ever since the Fall, fear of death, fear of being forgotten, fear of being discarded and unloved has been a ruling passion of our hearts.

Love and fear oppose one another. Fear causes us to be calculating, to hold back, to defend ourselves. Love is free and freeing, takes risks, and boldly withstands temptation. Fear is behind many of the insane things we do, especially those done in the name of love. It is also what causes us to abandon our love commitments.

Faith puts us in touch with the God who defeated death, who did so by means of costly sacrifice, who did so for my own undeserving sake. The more this reality penetrates my heart, the more I gladly respond to the calling to take up my cross, to follow in Christ’s death. “Perfect love casts out fear” (1st John 4:18). 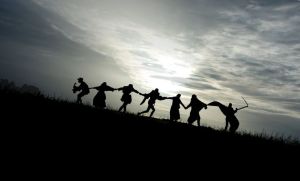 Death, although defeated still remains in the form of bodily death. But because this no longer means my demise, I am free to love God’s children without carrying the burden of fear and loss. Bodily death and its related anxiety is now the occasion for a faith that works.

For a remarkable mediation on how Christ’s resurrection frees us to love in the face of death, see this post from Mockingbird.

Because of Christ’s love, life is no longer a game of chicken. I need no longer pretend death doesn’t exist in order to live. Rather, I can look death squarely in the face, for death is no bound, and I can begin to learn to live as I always secretly have longed to live…loving.

The sting of death is sin, and the power of sin is the law, but Christ is Lord of All.